When Knitting Is Evil 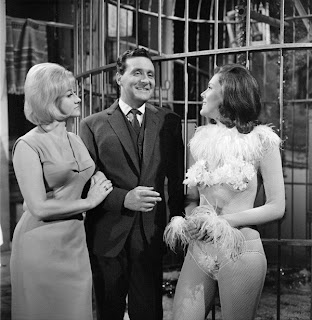 Last week I picked up a DVD of the old Avengers tv series. It's a charming sort of 1960s show, now a cult favorite, featuring the characters John Steed (center) and Emma Peel (right) as vaguely defined spies fighting vaguely defined evils. You may recognize "Mrs. Peel," as Steed calls her, as the beautiful and talented Diana Rigg. Steed is played by Patrick Macnee.

I picked this particular disc at random, really I did, so imagine my surprise when the first episode featured little old ladies who murder with knitting needles! (BTW, this isn't a spoiler; you know what the ladies are up to from near the beginning.)

But I won't give away more than that. If you want to knit along with the evil knitters, this is episode 17, "The Girl From Auntie, " and it is available on YouTube.