I never seem to get tired of patterns using mitered squares. I think that you have to love this technique to do it because most patterns require that you knit a lot of them. 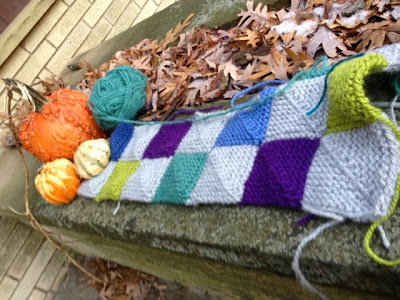 Mitered squares make for great TV knitting. Keith and I are just beginning the 3rd season of Breaking Bad, which is helping quite a bit with this baby blanket. Still, I feel a little odd knitting a baby blanket while watching such a dark show!

Not that I've watched one minute of TV this weekend. Cooking and hanging out with family has kept me busy. Last night I got to celebrate Hanukkah with both of my kids, and I was in heaven!

Is there a technique that you never tire of?

Posted by Caffeine Girl at 11:14 AM No comments:

This is how Nagi spent much of Thanksgiving day: 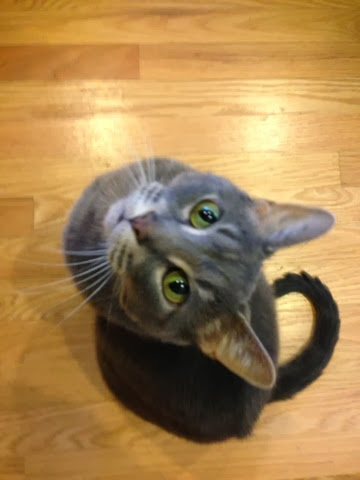 He is looking up at Keith's brother, Brian, who was carving the turkey. Whenever anyone was near the bird, he took up this post!

We had a relatively quiet -- but truly relaxing -- holiday. I was nervous about roasting the turkey -- it's only the third time in my life that I have done so -- but it turned out to be deliciously juicy meat, perfect for homemade cranberry sauce. Keith's family has a tradition of eating noodles and gravy over mashed potatoes. I know it sounds odd, but I was a fan the first time I tasted it!

So, one holiday down; one to go. Tomorrow night we celebrate Hanukkah!
Posted by Caffeine Girl at 5:18 PM 1 comment:

Less than a week ago, it was sweater weather. Then the overnight temperatures plunged to 7 degrees (-14 degrees celsius) this past weekend and this morning we woke up to snow. Fortunately, I love cold crisp days, especially when the sky is blue, as it was today.

I also love getting to wear my hand-knits. I pulled out these mittens over the weekend: 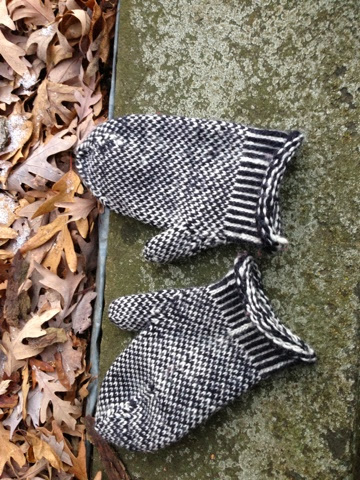 They are from Robin Hansen's book, Favorite Mittens. They are actually quite homely, at least as I knit them, but they are so warm. They taught me why Fair Isle is more than decorative.
Posted by Caffeine Girl at 5:21 PM 3 comments:

Email ThisBlogThis!Share to TwitterShare to FacebookShare to Pinterest
Labels: mittens 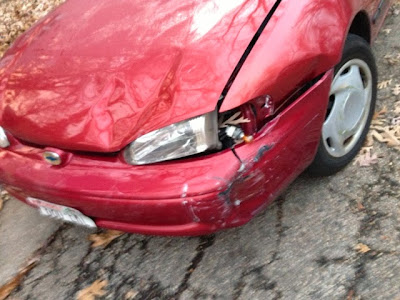 Of course, the irony of getting hit when I was trying to get to meditation is obvious. I think the other driver should do some meditation! I can't do anything about the other party, but I hope that I've become a more mindful driver.
Posted by Caffeine Girl at 5:45 PM 5 comments:

If you've been following my holiday knitting saga, you are no doubt dying of boredom. I am now on my 5th Turn-a-Square Hat by Jared Flood. It's a great pattern, but even I need a little diversion.

Since I SHOULD be holiday knitting, I decided that it would be OK for me to do some stash-busting. 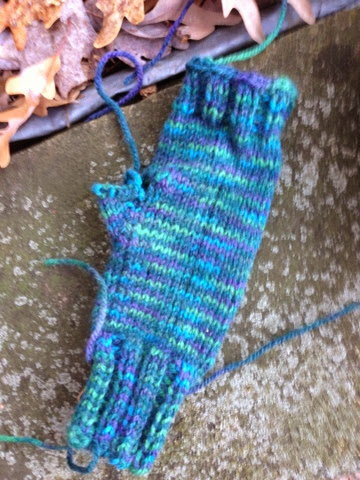 I wanted something quick but useful, something that could be a gift or for myself. Seeing as fingerless mitts seem to be quite the fashion item this season, I went in search of a simple, comfy pattern. I found one that I love: Peekaboo Mitts.

This pattern is so simple, but is exactly what I was looking for. Often, mitts are too short in either the cuff or the hand (or both) for my taste. These are 9 inches long -- which is downright luxurious. I am thinking that it would be nice to turn out a few of these for gifts!

What are your last-minute gift knits?
Posted by Caffeine Girl at 4:17 PM 1 comment:

I wish I could take credit for this lovely wrapped bracelet: 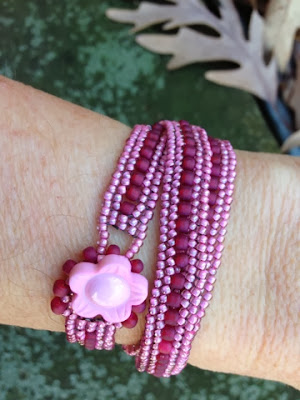 But I have to give credit where credit is due. The Lissome Plum Bracelet is the brainchild of Roxi Rogers. The bracelet and directions for making it can be found on your newstand right now in Quick + Easy Beadwork, a special issue from the Beadwork folks.

It's a very simple but elegant pattern that uses sizes 11 and 8 beads. You can give it a more dressy feel with a more formal button for the closure. I chose a vintage plastic button from my stash since I don't have much occasion for formal jewelry.

My co-workers paid me many compliments, so I'm wondering if I could whip up a few more for holiday gifts? I think it would be tons of fun to check out different color combinations.

This particular issue of Beadwork has lots of great projects that aren't too difficult. And, no, I'm not getting paid by Beadwork to hawk their magazine!
Posted by Caffeine Girl at 9:48 AM 1 comment:

I hope I'm not the only who knits at work. I don't knit in front of the kids. For one thing, they'd probably try to snatch my dpns to use in play fights. Secondly, I don't think I could solve linear equations while turning a heel. 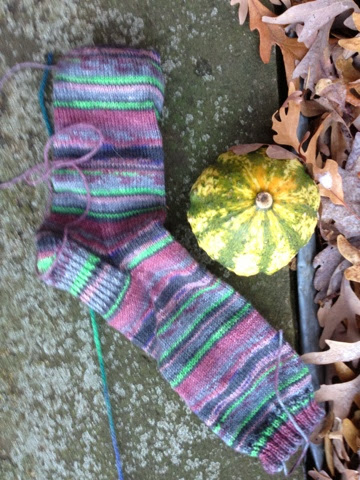 The times when I NEED knitting is when I'm in meetings. I've never been good at sitting still. Both of my careers involve jobs with lots of movement: newspaper reporting and teaching. I got through high school and college by doodling and working on my handwriting (and I do have lovely handwriting). I really think I'm one of those people who thinks better when she has something in her hands.


I started the sock above at the beginning of this school year. In the past, It has taken me a year to do a single sock. I finished this one at the end of the first quarter -- which tells you a lot about how things are changing for teachers, at least in Wisconsin.

Thank goodness for knitting! At this point, I could knit two full pairs by the end of the school year!
Posted by Caffeine Girl at 6:55 PM 3 comments:

It has been a long time since I posted an FO, but here, at last, is the Turn a Square Hat. 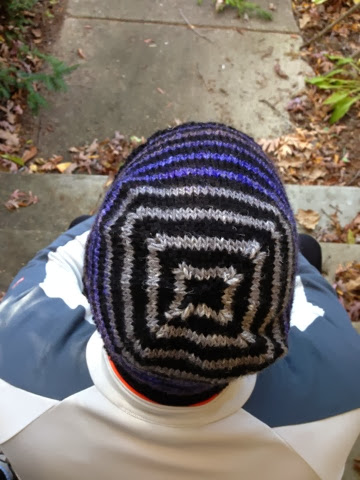 Since none of my male relatives read my blog, I guess I can say that I'm churning these babies out like nobody's business because this they are all getting one for Hanukkah. Or Christmas. Between them, they celebrate in a variety of ways.

I've made four of these, but would like to knit a couple more. Or not. It would be fun to do something else! Still, I am happy with the way the hats turned out. The colors of the Noro really stand out against the solid stripes (Cascade 220). I knit the hat per the directions, except I did a longtail cast-on, which seems to be plenty stretchy. The pattern calls for a tubular cast-on, but I'm devoted to the longtail. It's always worked for me.

How are you doing on your holiday knitting?

SOFA Is Not a Couch!


My friend Tsela and I headed to Chicago last weekend to attend SOFA, the Sculpture Objects and Functional Art + Design, held on the Windy City's Navy Pier. It's the kind of place where "real" artists show and sell their works -- and the kind of event that attracts the truly rich. The cheapest thing we saw was a simple metal ring for $495! All in all, it's a fascinating event.

This piece is woven from pages of magazines and comics: 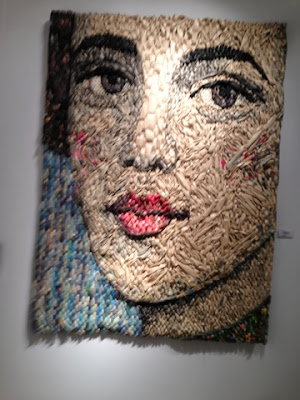 Would anyone ever drink out of these hand-painted coffee cups? 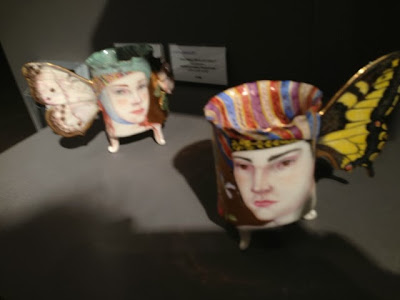 And there were lots of "dolls" -- none of which you would want a young child to play with! 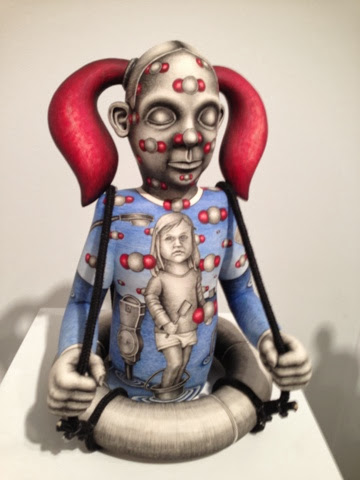 It was a typical November day: cold, windy and gray. Still, I love the skyline under any circumstances! 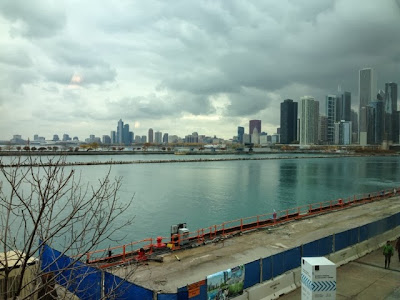 Posted by Caffeine Girl at 3:16 PM No comments:

Featured on the Web

One of my drawings is featured on the Draw Madison web site. You can see it here.
Posted by Caffeine Girl at 5:21 AM 1 comment: