The View From a Disappointing Weekend

It's a three-day weekend in the States, so of course I had plans. Not a lot, but there were a few things I was really looking forward to. Instead, my weekend looks like this: 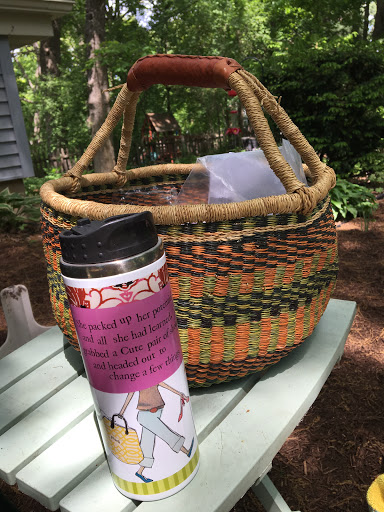 I've been braving the 97-degree weather to try to heal on the lawn chair in our backyard. I was in Urgent Care this morning -- after a week of feeling under the weather -- and it turns out I have a sinus infection. As if it's not bad enough to have a sinus infection on a holiday weekend, I am worried this will mean postponing the surgery I have set for Thursday. Here's hoping the Amoxicillin does the job! 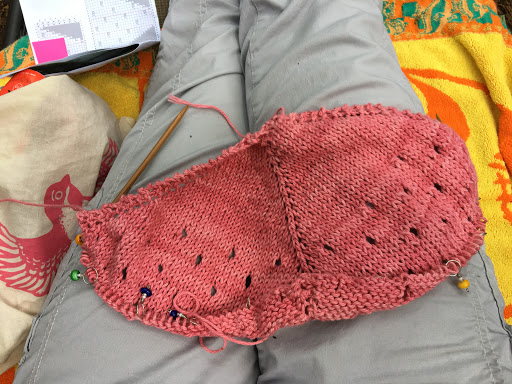 I have spent quite a bit of time dozing, but I have made some progress on my Campside shawl. This was a splurge purchase at the April meeting of my Knitting Guild. I think it will be an excellent travel shawl, as long as I finish it in time. The yarn is a cotton-linen blend, a bit hard on the hands. I can only do a few rows at a time. 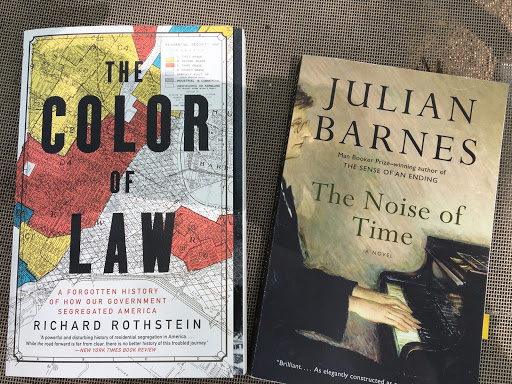 I finished The Noise of Time by Julian Barnes, a novel about the composer Dmitri Shostakovich. It's about his struggle as an artist in a totalitarian country, the USSR. It's very interesting, but not a page turner. It took me a while to get through this very short novel.

I'm thinking of launching into The Color of Law by Richard Rothstein about the role of the federal government in segregating America. Not sure I'm up to it, though.

My daughter cheered me up with a phone call and this photo: 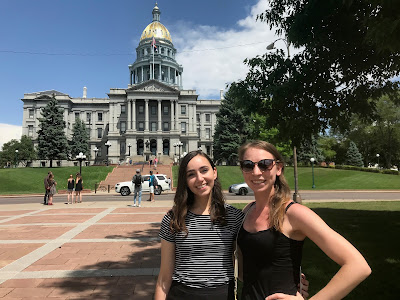 She's in Denver for a wedding, and while visiting the state capital today, she ran into her cousin Jennifer, who had made a last-minute weekend trip with her boyfriend.

Jennifer lives in Los Angeles and Rachel lives in Miami, so this was very unexpected. Sadly, Rachel was on her way to the wedding so they couldn't even have a coffee together.

I hope you are healthier than I this weekend!

P.S. Did I mention that we do not have air conditioning?

It's All About Curious Handmade


I have managed to finish Magnolia, the second pattern in the Secret Sock Society, and I'm very happy with them. This pattern was a lot harder -- for me, at least -- than the first pattern in this year-long KAL from Helen Stewart of Curious Handmade. There are a lot of cables, and I cannot cable without a needle on fingering-weight yarn. 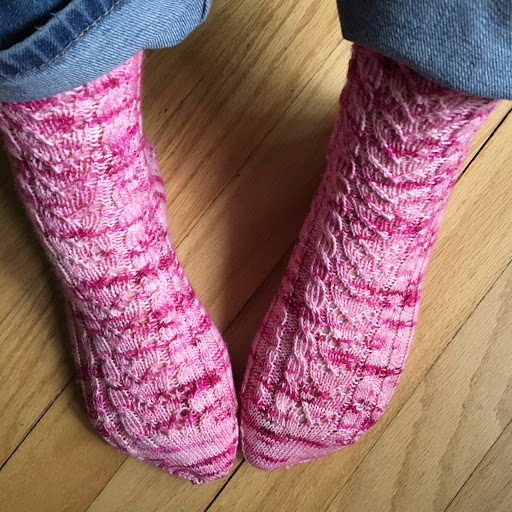 I think the yarn is a bit too busy for the pattern. Still, they are very pretty. This is the second pair I've knit from Great Lakes Tweed yarn, and they slide on like butter. This is truly a luxurious yarn! 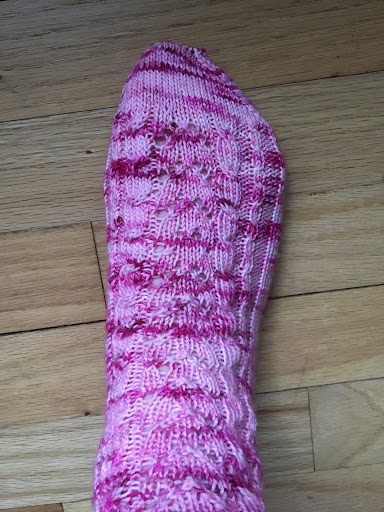 The next pattern should come out in early June, and I'm looking forward to the next challenge.

In the meantime, I'm working on another Helen Stewart pattern, the Spindrift Shawl. It's hard to believe that such a simple pattern can yield a stunning shawl. 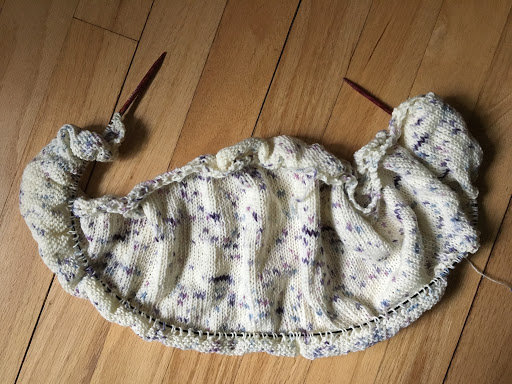 Ok, so this picture doesn't do it justice. But I'm on the bottom lace now, and it is very pretty. I started this a year ago and somehow it got buried in the knitting basket.

Thank you for all the comments about Magic Loop. I am relieved to find out that I am not the only one who struggles with this technique. A number of you suggested starting on DPNs and then shifting the stitches to the long circular. I am definitely going to try that!
Posted by Caffeine Girl at 4:24 PM 12 comments:

A Fail, A Finish, A Feline & Flowers

Have you ever dropped a Size 1 DPN on an airplane and found yourself crawling around on the floor to find it? Well, I have -- and more than once. Since I've got some travels planned for this summer, I determined to learn the Magic Loop method. 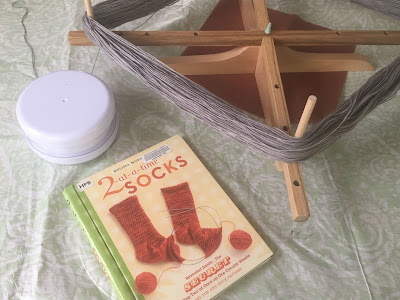 I spent (wasted?) an hour trying to get a pair of socks started. I couldn't even get the first sock going. At first, I spit out a few bad words in the direction of the book. But I know a lot of people have used this book. I think we may be talking user error here. Maybe some You Tube videos would help me more.

This failure was balanced by the finish of my mindless knitting project, a pair of self-striping socks in the Hermoine's Everyday Socks pattern. 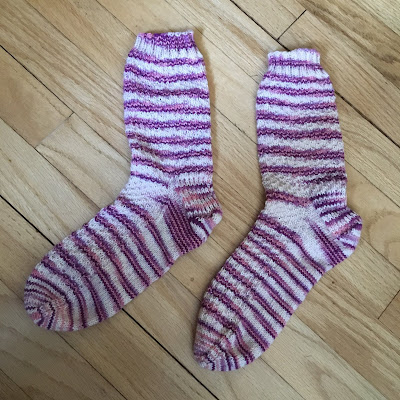 I bought this yarn at 50% off and it worked out be much prettier than I expected. Into the gift box they go. 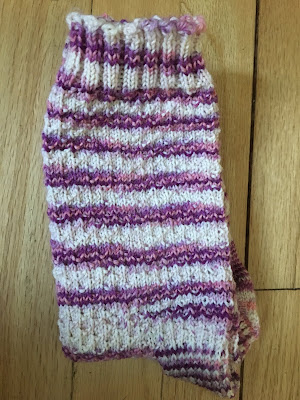 I have to throw in this photo of Kola. I love making their heads look too big for their bodies. Makes me laugh every
time. If that seems odd, remember that I work with teen-agers. 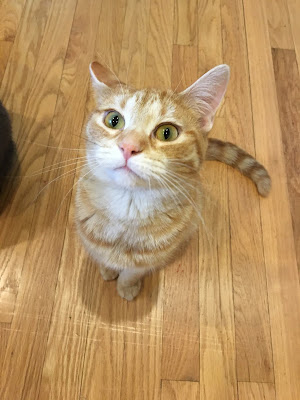 And last, but not least, we finally have flowers around here. I love spring flowers, especially the early ones like lilacs. 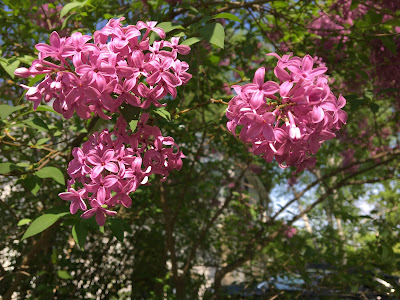 Wishing you a productive week!
Posted by Caffeine Girl at 5:47 PM 19 comments:

Despite all the graduation excitement, there has been knitting. This gorgeous cake of yarn is turning into a Field of Wildflowers hat. 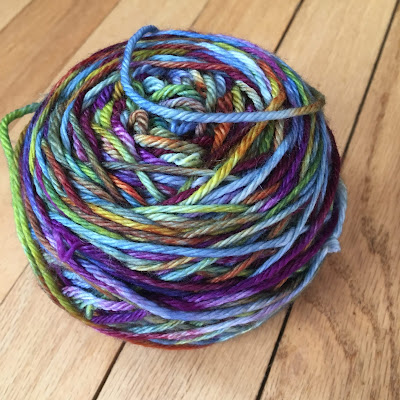 It is a Joji Locatelli pattern, so of course it is well-written and easy to follow. It has quite a few cables, pushing me to take time out to start learning how to cable without a cable needle. 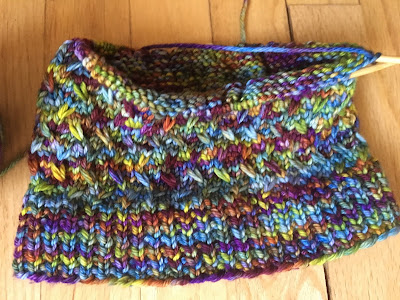 Thanks to Internet tutorials, I can cable without a needle -- but only when the crossed stitches are held to the front. The yarn is local -- Four Crows Yarn Hand-Dyed Worsted.

With all the company, I needed a mindless project. My go-to is always self-striping Opal. I can't find the ballband, but I am enjoying watching this sock emerge. 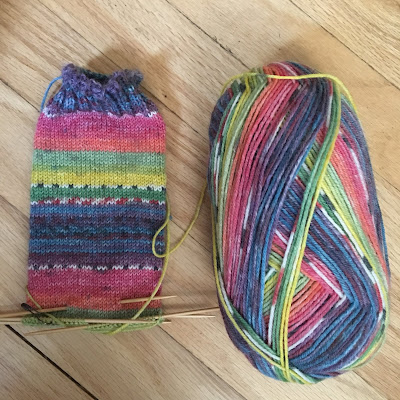 Our hummingbirds are back! If you look closely, you can see a female sipping at the left side of the feeder. 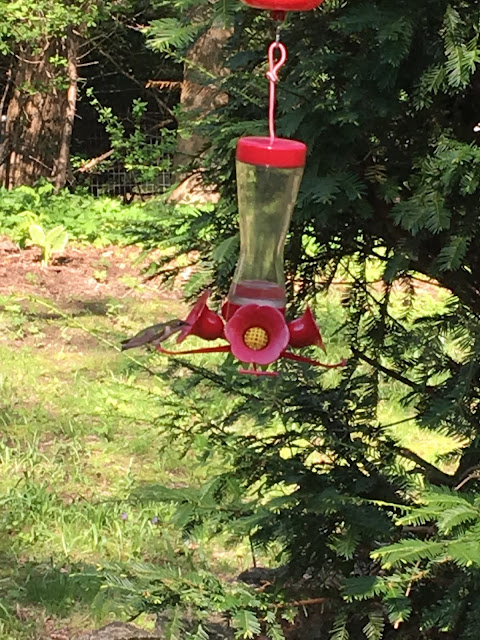 It's Wednesday evening, and I am still pretty darn tired.  Not that I'm complaining! It's a blessing to have events and people to celebrate.
Posted by Caffeine Girl at 4:44 PM 17 comments:

Once there was a little boy...


who thought he wanted to be a rock star ... 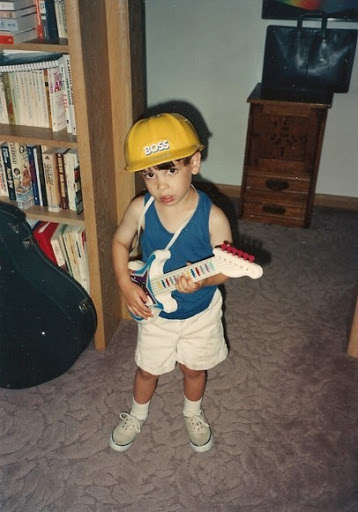 or a police officer. 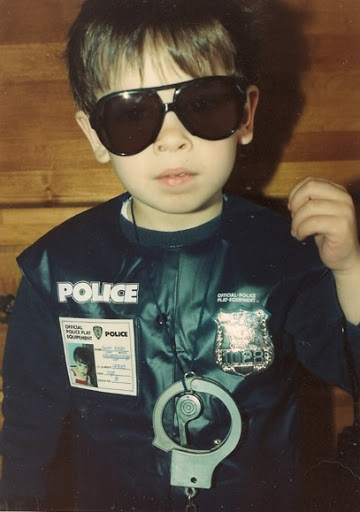 But it turned out that what he really wanted to be was a veterinarian... and now he is! 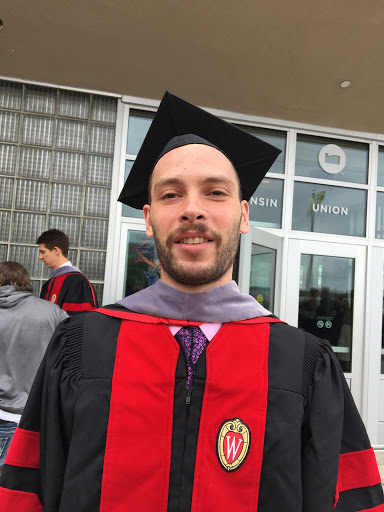 Tears leaked from my eyes through the entire graduation ceremony on Saturday. This young man and I have been through the best of times and the worst of times. For a long time, he had no intentions of going to college, let alone graduate school. He put a lot of effort into being a death-metal guitarist in his late teens. No one was expecting him to put that aside and go to college. 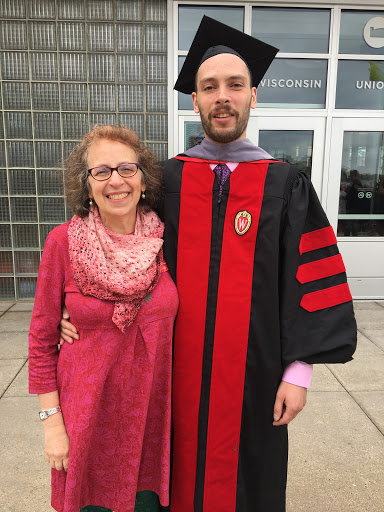 Of course I am proud -- and pleased that he found a way to make a living doing something he loves. In a couple of weeks he'll take the next step and move to Hollywood, Florida, to start an internship. 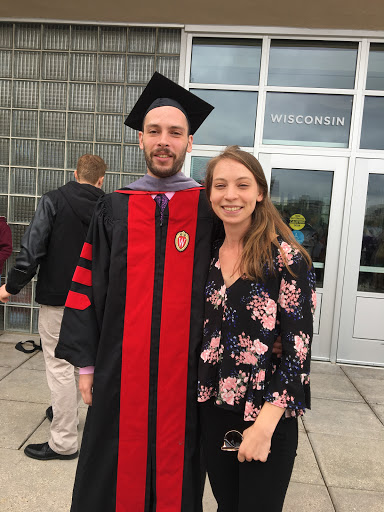 He'll be near his sister, who is in grad school at the University of Miami. Guess where I'm going for winter break next year?

It's been a hectic week with family from out of town and a big party. I was so crazed that I didn't take any other photos. But the experiences and memories are more important, right?

My new friend Laura from Pennsylvania sent me an awesome batch of goodies as part of swap organized by Andi of My Sister's Knitter. 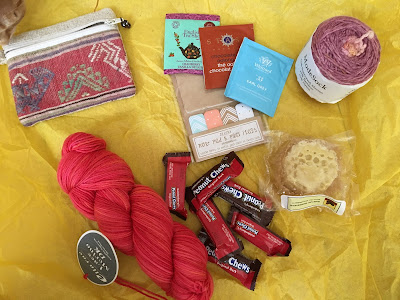 I know! Can you believe it?

So there are two yummy yarns in my favorite color range of pink. The skein is Ella Rae Lace Merino DK, which is butter soft.  The caked yarn is ModeSock in a gorgeous raspberry pink.  I think both are destined to be things that go around the neck. 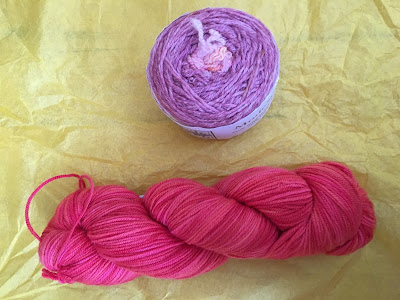 I love the notions bag. It's very ethnic-like, one of my favorite styles. Post-Its are a such a great gift for a knitter. I use them constantly. I'm saving the packets of Soak for handwashing clothes on my travels this summer. 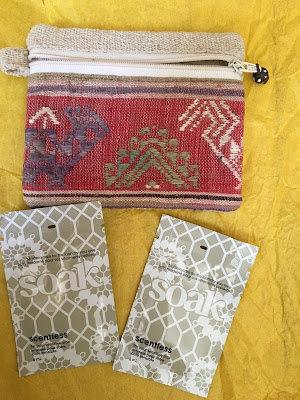 And then there is the yummy stuff: I'm saving the cupcake for the weekend, but I can already tell you that the Peanut Chews are delicious! I'm looking forward to savoring the teas -- especially chocolate mint oolong. 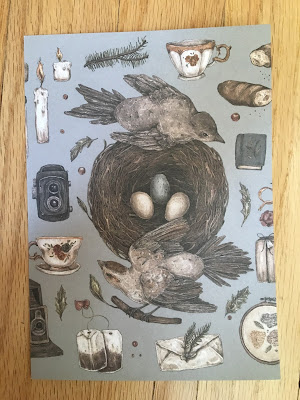 Does the art on the card look familiar? It will if you are a Taproot fan. Isn't it gorgeous?

Thank you so much, Laura! You made my week!
Posted by Caffeine Girl at 5:54 PM 10 comments:

Spring has finally come to Wisconsin. I love these early days of spring because that's when the Magnolia trees blossom. I always think of Magnolias as Southern so they feel a bit exotic here. We had a glorious weekend. I took knitting breaks but mostly I'm getting ready for Seth's graduation next weekend. 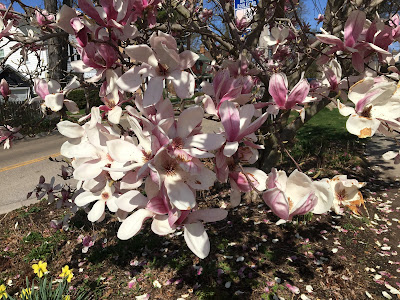 I'm absorbing the news that the four-months of treatment I went through this past winter didn't completely work and I'll be going on medical leave to have surgery and recover at the end of May. 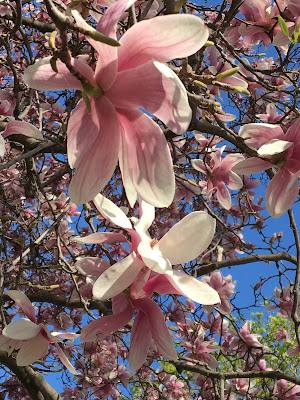 So it was cheerful to sit in the sun and work on my Magnolia socks. This is sock number 2, and it is coming along nicely. Knitting is very calming at times like this. 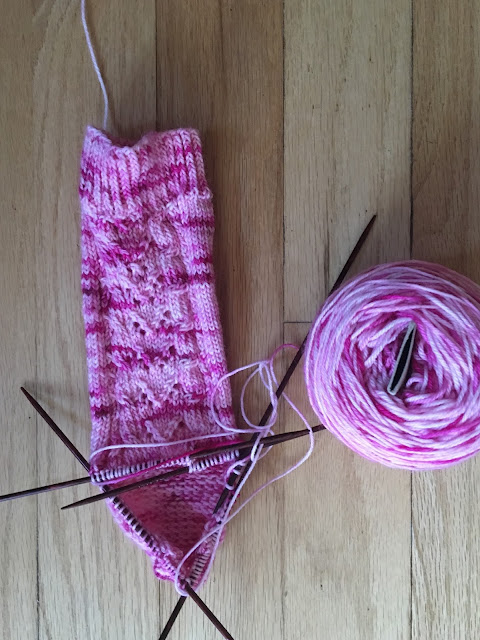 I'm trying to do some real spring cleaning. Luckily for me, I have a great helper: 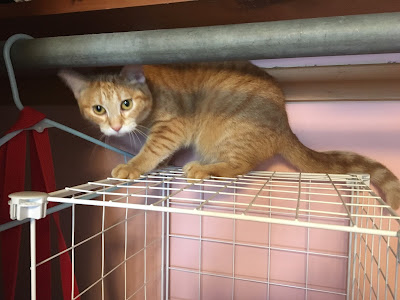 It was so interesting to read how you deal with mistakes in your knitting. I admire those of you who have high standards and fix your mistakes, but I'm glad to know that I am not the only "fudger".
Posted by Caffeine Girl at 5:37 PM 13 comments: