When A Pair of Mittens Is More Than Two

No, I don't have three hands -- although I frequently wish I did.

I've finally finished the second Spruce Tree Mitten and have begun frogging the first one. I need to pull out more because the problem is that the thumb needs to be lower. Knitting a pair of mittens in worsted weight should not takes months and months -- but I have made SO many mistakes. I hope that I'll be able to move ahead more smoothly 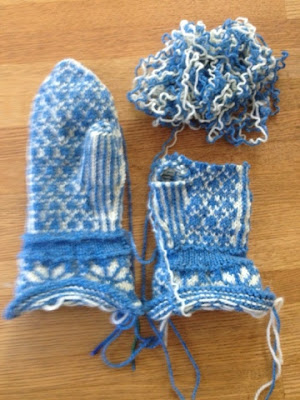 I do want to knit more stranded mittens, but I definitely need a change so I won't make a second pair of these -- at least not for a while.  Also, I'm won't know how I'll like the flared cuff until I have a chance to wear these in the cold.

I decided not be so dogged with the book I was reading, the popular Dietland by Sarai Walker. I know a number of people who liked it, but the premise of a group of weight-loss guerillas just didn't work for me.  Instead, I found myself drawn to a little-know George Orwell novel, Keep the Aspidistra Flying, which is about the lure of money to a failed poet who has renounced the material world. 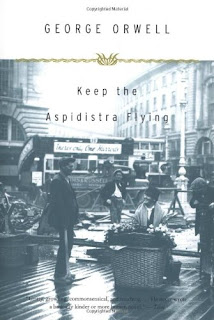 It's rather slow in the Victorian vein, which is fitting as the Aspidistra is a plant that was popular among the Victorian middle class. I am liking it. Orwell choses words with care and crafts charming sentences, but I am hoping the pace picks up!

Don't forget to check in with Yarn Along.