Not As Good As It Looks 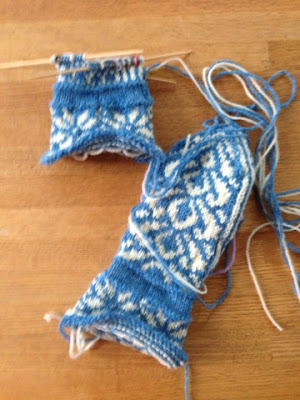 However, it doesn't feel good. EZ's pattern tells the knitter to decide where to start the thumb. As a result I have a mitten that would fit someone with very, very short fingers. In short, I waited too long! So, I have started the second mitten and I'll see if I can get it right. Then I'll have to frog the entire hand of mitten #1 and do it over. Sigh. Because it's made with worsted-weight yarn, it won't take forever. 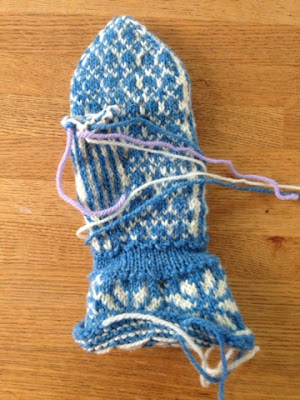 Which is good because time is in short supply. My students start school tomorrow and it looks like a rambunctious bunch. We are seeing a lot of families moving to Madison from Milwaukee and Chicago. Today's New York Times reports that murder rates are up sharply in both cities, so I have to wonder if there is a connection.

As for reading, I'm finishing up 1913 by Florian Illies. It's a very odd little social/cultural history of Europe on the brink of World War I. It's told in short vignettes that follow the lives of such figures as Freud, Rilke, Picasso, and others I'm less familiar with. I am liking it, but I think it's a book for history buffs. I'm looking forward to reading Shocking Paris, another cultural history, only this one focuses on artists in Paris between the wars. 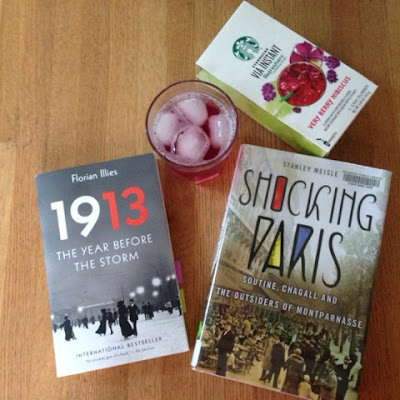 Just in time for school, summer is reminding us that it ain't over yet. Temps are in the high 80's and the 90's this week. Our school isn't air-conditioned, nor is my house. I've become addicted to Starbuck's Instant Via Very Berry Hibiscus. It's kind of like a Kool-Aid for adults. I highly recommend it!

I'll be joining Nicole at Keep Calm Craft On.

Posted by Caffeine Girl at 5:20 PM