Boy, does it feel good to be home this evening. Even after a restful Rosh HaShannah yesterday, it was still a jam-packed week. So, I'm focusing on both a book and knitting project that are relaxing. Tomorrow is my birthday so I feel I deserve some R&R. 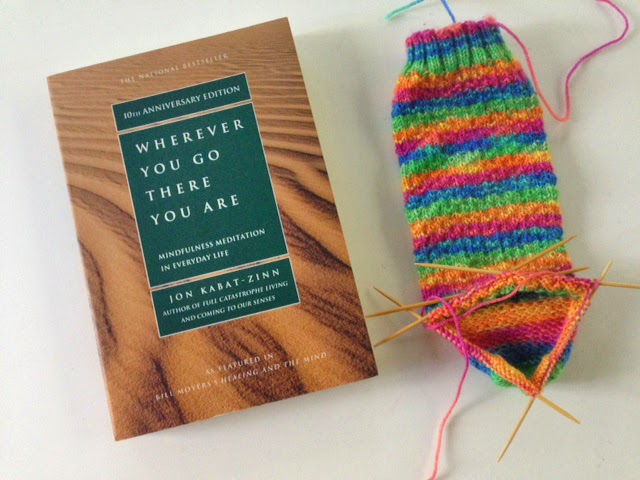 The sock is the second of a pair, a Hermoine's Everyday Sock. Even though we are having warm weather now, winter is just around the corner in Wisconsin. (Though, according to the New York Times, the Midwest will be much warmer in another 40 years.) This will be a fun pair to wear with Birkies.

I've been meaning to read Wherever You Go There You Are by Jon Kabat-Zinn for years. Maybe even decades. It is one of the classics of American mindfulness. It isn't the type of book that you devour in one or two readings, you need to nibble at it day after day because it gives you so much to think about. That's not to say that it is difficult reading; it's not. Here is a short passage to give you an idea:

"We tend to be particularly unaware that we are thinking virtually all the time. The incessant stream of thoughts flowing through our minds leaves us very little respite for inner quiet." (p. 9) I think that's what is called Monkey Mind, which seems to be my default state.

Earlier this week, I had the honor of meditating with monks and nuns from Plum Village in France. Plum Village is the monastery established in the late 1960s by Thich Naht Hahn, who is second only to the Dalai Lama in the world of mindfulness. It was so thrilling to be in the same room with "sisters and brothers," as they call themselves. It reminded me of how I felt when I saw Bob Dylan in concert in 1978!

If you have ever wondered what this mindfulness stuff is all about, the first book you should look at is Peace is Every Step by Thich Haht Nahn. It is life-changing stuff -- and a smooth, poetic read to boot!