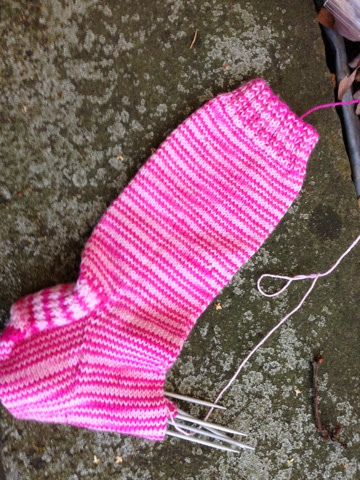 jk
This sock has seen a lot of doctors.

Oh, there's nothing wrong with the sock. It's just the project that I carry around town with me so that I can knit whenever I have a few extra moments. Because of breaking my leg earlier this year, I've spent a lot of time in doctor's offices!

I used to get a lot more purse knitting done, but then I got my iPhone and discovered Bejeweled, which is an incredibly addictive game. When I first got hooked on it, I emailed my friend Dori, who had been playing for a while, saying that I had a "little Bejeweled problem." She replied: "Oh, there is no such thing as a LITTLE Bejeweled problem!"

I really want to cut back on the Bejeweled, though, because the knitting really is a better use of my time!
Posted by Caffeine Girl at 4:02 PM

Email ThisBlogThis!Share to TwitterShare to FacebookShare to Pinterest
Labels: socks