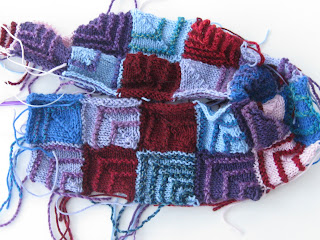 I am still plugging away at my Crayon Box Jacket. I need breaks from it because knitting the squares can be a bit tedious. However, for the most part I'm enjoying it.

I've done quite a lot of the knitting to Downtown Abbey, season 3, which has been streaming on PBS. However, I didn't watch fast enough, and now I can't watch the final episode -- the one everyone talks about! Apparently the episodes only streamed for a limited time.

I've also been knitting to Game of Thrones, which Keith and I are very absorbed in. I don't usually like fantasy fiction, but this really stands out. Amazing plot and characters. I tried reading the first book, but I don't like fantasy enough to put that much time into it.

I blogged twice last week, and I'm aiming for at least three posts this week. We'll see if I can manage it.
Posted by Caffeine Girl at 10:26 AM