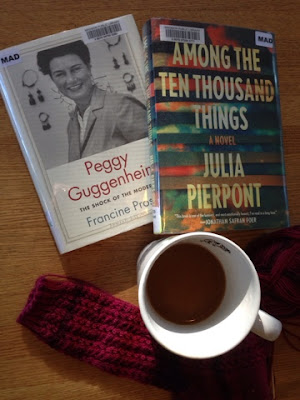 Yes, this is the same sock from last week, but I am now nearing the toe! It does feel good to finish old projects -- though, it lacks the kick we knitters get from casting on! I also finished the Garland Shawlette started in 2013 and will try to get it blocked and photographed soon!

I found these two books at the library! Both are relatively new books that I've been wanting to read. Among the Ten Thousand Things by Julia Pierpont is a novel about the fallout in a family after the husband's affair is revealed. I'll read pretty much anything by Francine Prose, and art collector Peggy Guggenheim has always interested me. She lead quite the bohemian life in the mid-20th century.

I'm also reading the first issue of the making zine, thanks to Rose. 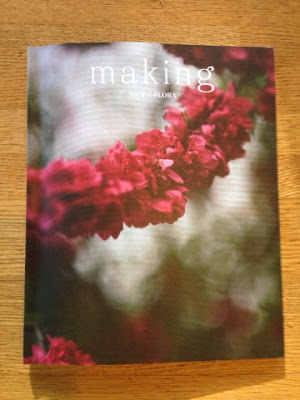 I think the only way to get your hands on this beauty is to order it from Carrie Bostick Hoge's web site. It is totally worth it. The sweater patterns are to die for! I've only perused it so far, but I'll report back when I've had the chance to soak it in.

I'll be joining Ginny for Yarn Along. Can you believe she's pulling this off with a brand new baby? That woman is amazing!
Posted by Caffeine Girl at 5:51 AM