I felt really crummy all week. I thought that work was just getting to me. It didn't help that a former student, now age 16, was shot and killed while walking down a street on Chicago's West Side Wednesday night. We read about black men being murdered all the time and it's always sad, but it's an extra punch in the gut when you know the victim.

He was bright and his future was promising. He was playing football and hoping for a college scholarship. My heart goes out to his mother and the rest of his family.

Partway through the day Friday, I realized that I had a sinus headache. It was kind of a relief to realize that was why I was so tired and achy. Since I got home yesterday, I've been steaming my sinuses, resting, drinking gallons of herbal tea. 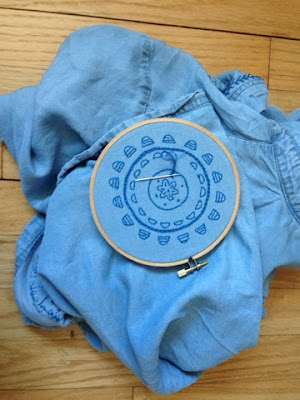 And embroidering. For some reason, that is the needlework that has been calling to me between naps.

This is a summery shirt that I'm embellishing. I start by penciling in some basic lines using a commercial stencil. And then I just kind of doodle from there. 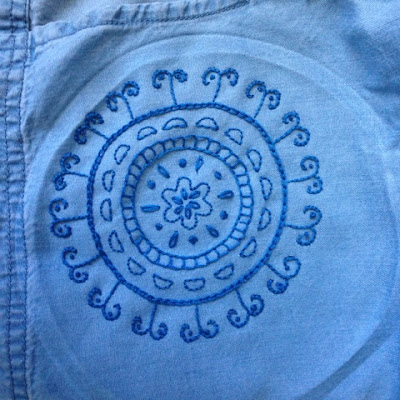 At least I feel like I'm getting something done!
Posted by Caffeine Girl at 4:07 PM