Oops! I Did It Again

Not long ago, I messed up my very simple Pelerine shawl by missing the end of a round. Inadvertently, I began knitting in the round, which totally disrupts the garter stitch. I painstakingly pulled apart the Unspun Icelandic wool and reknit. ... until I made the same mistake again.
I decided that there was a message behind making the same, very stupid mistake twice. I pulled out the needle and cast on a second Pelerine.

I'd realized that I needed to make one as a gift, but didn't want to buy a second needle so I was rushing through the first one. Hence, the mistakes. You may wonder why I didn't just finish the first one and give it as a gift. Well, here's why: 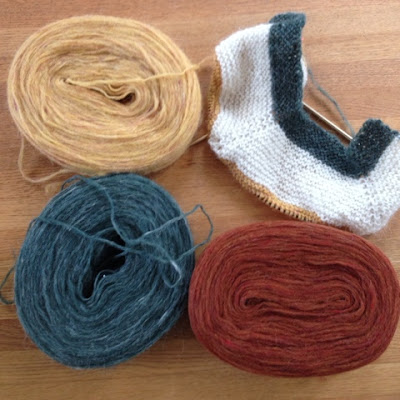 It's all about the colors. The pinks and blues in the first one are my colors. However, the person I want to gift prefers Earthy colors. So, I ordered a few disks from Schoolhouse Press and launched into a second shawl. And I'm so glad I did. I hate rushed knitting. What's the point of that?

Did you notice how the disk of Unspun Icelandic in the first picture has been elongated? That's what happens when you leave the disk sitting around the living room of a house with cats!!

It's a beautiful sunny day here, but cold. I went for a walk with a friend this morning and we both wore mittens. Oct. 3 is a little early for that, even in Wisconsin. There is so much around the house that I should be working on, but I've been having quite a bit of neck pain lately, so I suspect I'll have a lot of knitting time while I apply heat.

Any home remedies for neck pain?
Posted by Caffeine Girl at 9:25 AM