Spring Is The Time for Stitching

This weekend, a powerful desire to embroider something totally free-form hit me. Next stop: Goodwill. If I'm going to be daring, I have to feel like I'm not ruining a perfectly good shirt!

Next stop: Picking colors -- the most fun of all. A few months ago, I ordered a whole bunch of embroidery floss from Sublime Stitching. I wound up a bunch of it this morning: 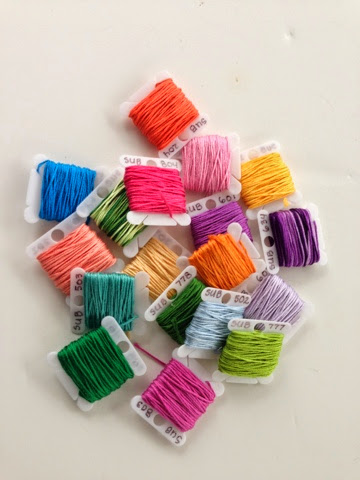 Are these colors not luscious? See why I could not resist?

I've long been an admirer of Jenny Hart, who founded Sublime Stitching in 2001. I discovered one of her books, Embroidered Effects, in San Francisco a few years ago, and she inspired me to pick up the hoop and floss after a gap of a couple of decades. She pioneered a style of designs that are inspired by tattoo art. She has brought embroidery into the world of fine art, with her works appearing in Vogue, Rolling Stone, Juxtapoz and many others. The Smithsonian American Art Museum has even acquired one of her works!

In addition to being a successful artist, she possesses mad marketing skills. Her beautiful flosses have the most inspiring and adorable names and slogans. To wit: A pink called Honeysuckle has the slogan of "Flowers droop and sigh ..." A light green called Sprout carries the slogan of "Hello, world! I'm thirsty." A baby blue called Blue Fondant is paired with "Can you really eat this part?" One more: A yellow called Solar Flare says "I got sunny style."

So here is where my new adventure begins: 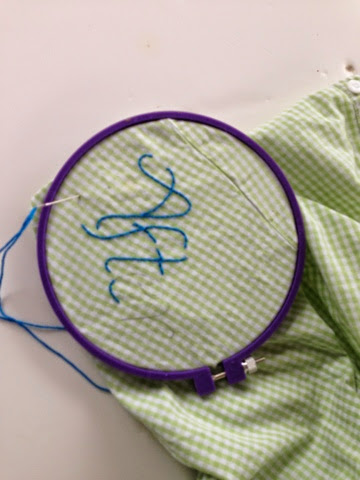 Email ThisBlogThis!Share to TwitterShare to FacebookShare to Pinterest
Labels: embroidery