I actually did finish the red Rikke Hat, but I don't have a photo of it yet. Instead, I have this, which came in the mail this week: 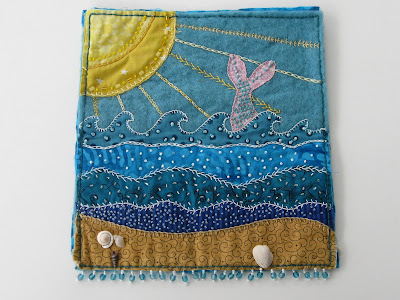 It is a mini quilt, which I submitted to Somerset Studio magazine. This incredibly beautiful magazine has a theme for each issue. They announce the theme in advance and request submissions. I've submitted a few things over the years -- bus I have never gotten anything published that was on a theme!

One of the problems is that I don't start early enough. Looking at this now, I can see it isn't finished. Those few shells at the bottom look ridiculously random. And the sun is far too plain. No doubt those are only a few of its problems. I think I'll work on it some more, but that's going to ruin the back, which I affixed after doing all the embroidery!
Posted by Caffeine Girl at 4:23 AM