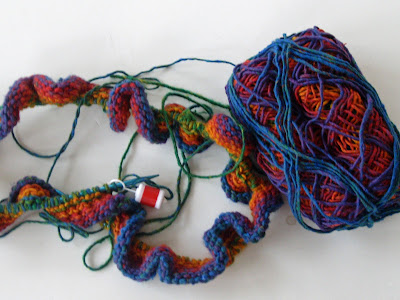 I am admittedly a yarn snob. I generally look down my nose at the bins of Red Heart and Bernat at the big box stores, like JoAnn Fabrics. Still, I'm enough of a yarn lover to wander through the yarn aisles at the big stores. And a little while ago, I came across this colorful yarn, Bernat Mosaic. It's 100% acrylic, which would usually keep me from tossing it into my cart, but I loved the saturated colors in this enough that I searched my memory for a scarf pattern that would work with it.

I decided that it would make a pretty Honey Cowl and picked up two skeins.

So it wasn't until I got home that I had a chance to check out the low-down on Mosaic on Ravelry, and the news wasn't good. Many other people had been seduced by the color, only to be disappointed once they started knitting. The yarn feels like cardboard, some said. Many said it broke while they were knitting. There were complaints about knots, too.

The yarn did have its fans, I was relieved to see. And about 2 inches into my Honey Cowl, I've had a knot but no breakage. I do have trouble with most wool, so it would be nice if this yarn worked out for me.
Posted by Caffeine Girl at 5:43 PM