A Poncho and Some Books

I really should be working on a couple of pairs of socks, both of which are gifts, but I can't seem to stop knitting rounds on my Winter Ridge Poncho. I am getting close to the final stage -- the neck -- so it's hard to slow down. 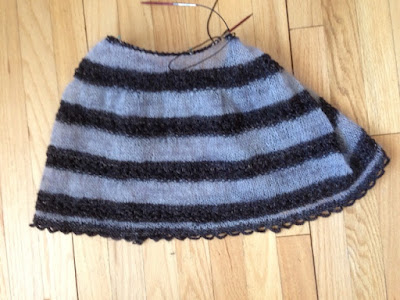 I'm knitting this as a KAL with my knitting pal, Marsha, and she has finished hers because she wants to take it with her on a cruise later this week. She modeled it for me yesterday and she looked darling in it. It will be perfect for cool days on deck. And the best part is that Ewetopia has kits available on their web site again -- just use the link above.
I finished Satin Island, and I liked it but it's not for everyone. Even though it's a novel, it reads almost like nonfiction. It's filled with all kinds of thought-provoking passages like this from the first page: "People need foundation myths, some imprint of year zero, a bolt that secures the scaffolding that in turn holds fast the entire architecture of reality ..."  Definitely a demanding read.

The plot kind of falls apart in the last quarter of the book, but I finished it anyway.  The narrator is a corporate archaeologist who is supposed to capture the narrative of the large company he works for.  Honestly, I'm not even sure if he accomplished that task. Like I said, it's interesting, but it's not for everyone. 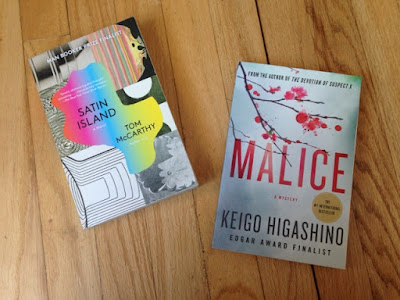 As an antidote to all that thinking, I picked up Malice by Keigo Higashino, a mystery from Japan.  I'm about 50 pages into it and I look forward to picking it up each night. It's told from various viewpoints -- and I love that approach. It is definitely a nice change!

I'll be linking up with Ginny to Yarn Along.

Posted by Caffeine Girl at 5:11 PM