A Controversial Yarn and Some Books, Too

I bought this skein of Plymouth Kudo  a year or two ago because I loved the colors and feel of the cotton/linen blend. This colorway screams summer to me and I was sure I could find a pattern that would make a perfect warm-weather accessory. 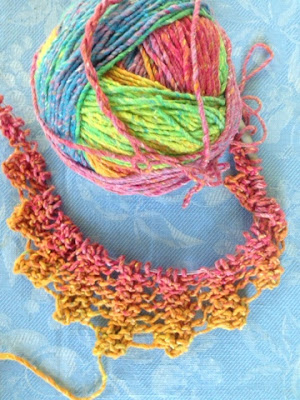 But the first few patterns I tried just didn't work with the yarn so I did what I should have done in the first place: looked at Ravelry. Out of curiosity, I first clicked on "Comments." The first one reads:
"This yarn breaks pretty easily - handle with care while knitting, especially if you have tighter tension." And a lot of the comments echoed this. Wow, I probably wouldn't have bought it if I'd read the comments first.

And I'm not sure that would have been a good thing. This yarn has its defenders and I am liking it. After looking through projects made with Kudo, I settled on the Gallatin Shawl, and so far I'm liking the way it looks. It's a nice, mindless knit, too.

As for books, I just finished Thew Swerve by Steven Greenblatt, which tells the story of how a papal secretary found a copy of Lucretius's poem On the Nature of Things in a monastary in 1417. Greenblatt makes a pretty convincing argument that this ancient poem, which puts forth ideas such as atoms as the building block of the universe, was instrumental in making the modern world. It's mostly a good read and interesting. Some parts are a bit more intellectual than I felt like reading, so I just skimmed them. 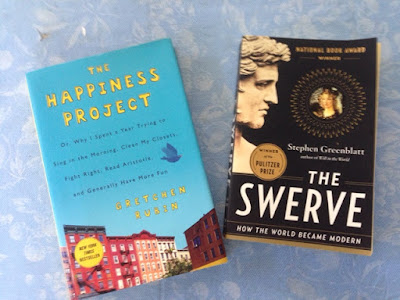 I've started The Happiness Project for about the 5th time. If it doesn't take this time, I'm donating it. It is a little hard to get excited about a wealthy New Yorker's attempt to make her life even happier. But it's been very popular so maybe there is something to it. Has anyone read it?

I'm checking in with Frontier Dreams to see what everyone else is up to this week.
Posted by Caffeine Girl at 3:41 PM