The Potato Chip of Pets?


Apparently the llama is the "Potato Chip of Pets." Who knew? 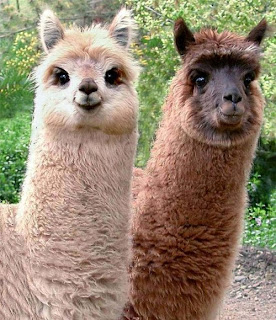 I certainly didn't until I stumbled across this article in the New York Times.

Owners say you can't start with just one because they are very social animals, so you have to get two or three. Like potato chips, you can't have just one.  The scary part is that you can start with three and end up with dozens.

Llamas are fairly new to the States because foot-and-mouth disease kept them out for many years. But the Peruvian animals are here now and number 115,000. That's about the same number as alpacas -- but let's not go there. It seems that there is bad blood between owners of llamas and owners of alpacas.

Owners say llamas have amazing eyes that make you feel that they understand all your troubles. Not being a huge animal person, I'm thinking that maintaining theses fairly large animals would involve a certain level of trouble. And expense.
But, not to worry. They say that llama wool is as desirable as alpaca, so maybe they pay for themselves. However, I haven't seen llama yarn in any store. At least not yet. Have you?
Posted by Caffeine Girl at 5:05 AM

Email ThisBlogThis!Share to TwitterShare to FacebookShare to Pinterest
Labels: yarn