All I have to show is a finished sock, the one I keep in the car. 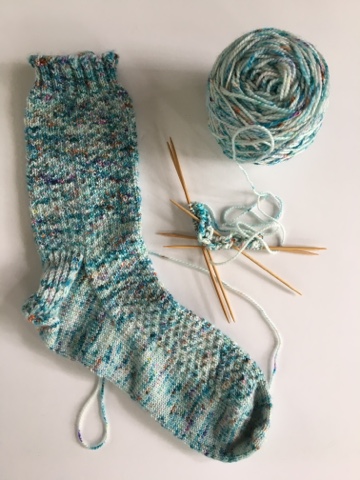 You have one, too, right? It's for long drives (when someone else is driving) and waiting in doctors' offices. This is a simple Hermoine's Everyday Sock in Plymouth Yarn's Splash. I love this yarn. It's very pretty and squishy, if a bit splitty.

I'm almost done with Dark Matter by Black Crouch. It is being heavily marketed at Barnes & Noble and I fell for it. Mistake. The plot does move quickly, but the characters are flat and the "science" isn't very believable 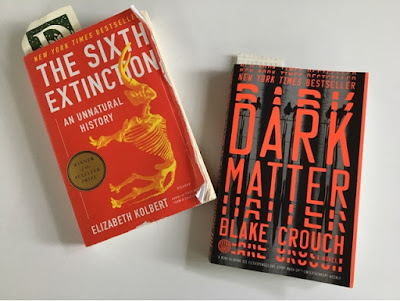 As you can tell, The Sixth Extinction, by Elizabeth Kolbert, went to Copenhagen with me (thus the messed up edges). It reviews past mass extinctions that have occurred and then moves into the current situation, in which many species are disappearing quite rapidly. It's beautifully written and fascinating. Obviously, it's not the most cheerful book.

Do join in with Unraveled Wednesday. It's easy, just jump over here.
Posted by Caffeine Girl at 1:11 PM