Looks Can Be Deceiving

This photo makes it look as though I have done no knitting on Brickless since last week. But that is hardly the case. 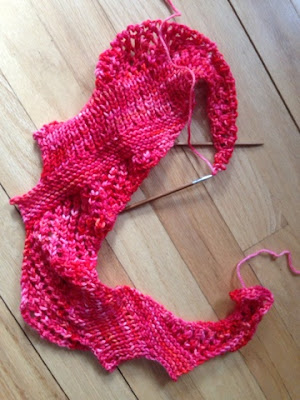 I realized last week that I wasn't following the directions closely and I had made huge issues on where to bind off, meaning that Brickless would not work out at all. So, I frogged and started all over again. Sigh. You would think I'd know enough to read the directions carefully. Will I ever learn?

So I'm now just a little past the point I was at last week. Also, the yarn is a tomato red, not the pink it keeps showing up as. I've tried taking photos at different times of day, but I can't capture the color accurately! 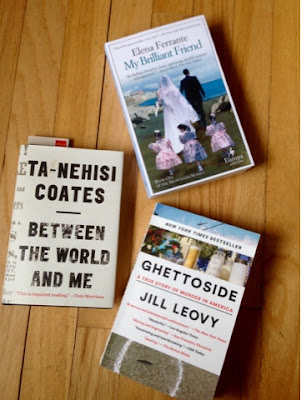 As for reading, I finished Between the World and Me and I think us white folks need to read this to begin to understand what it means to live in black skin in this society. He makes you feel both the fragility of the body and the joy of the culture. Most of my students are African-American, so it was a really important book for me.

I'm also finding Ghettoside to be insightful. This book centers around the murder of a L.A. Police Department detective's son. The author, an LA Times reporter, goes into the culture of both South Central Los Angeles and the police department. It is both fascinating and heartbreaking.

And I need to get going on My Brilliant Friend. I've just been so taken with the other two books, especially in the aftermath of the murder of my former student in Chicago. Two 16-year-olds have been arrested in his murder -- making the story even sadder. If you want, you can read the story here.

I'll be checking in at Yarn Along. See you there!
Posted by Caffeine Girl at 5:01 AM