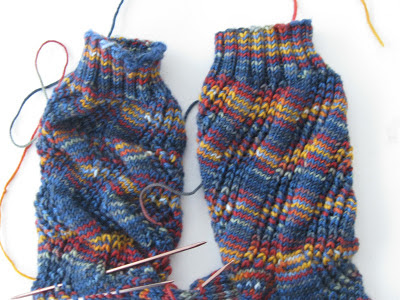 Did I really get this far on the second sock (on the left) without noticing the pattern was significantly different from the first sock? Apparently I did.

The pattern is Rib Fantastic from the book Knitting Socks with Handpainted Yarn by Barb Brown. I started these on January 1, 2011! Clearly I have had my struggles -- largely with the yarn, which is Blue Moon Fiber Arts Socks that Rock Medium-Weight. It's my first -- and only -- experience with BMFA, and I was put off by how thick the medium-weight is. Because I bought them on a Rav destash, I wasn't able to touch it until it arrived.

The yarn is amazingly soft and smooth, so I went ahead and began knitting. Got through sock number 1 and then the project went into deep hibernation. I pulled it out earlier this year when I decided to devote some knitting time to UFOs. Since it was the middle of the winter, I realized that thicker socks would be nice and cozy in my boots.

I knit along happily on sock number 2 until I pulled out its mate to make sure I was starting the heel flap at the same place. Well, length turned out to be the least of my problems. As you can see, I read the pattern differently for each sock. In disgust, I put the project back into hibernation.

However, being laid up these last 10 days, I decided to finish the pair. Really, who cares if the legs don't match? In fact, inside boots or jeans, no one will even see the legs!

Posted by Caffeine Girl at 8:19 AM