A week ago, my plan was to finish a shawl I started in 2013. Well, you know what they say about the road to hell... That project was put back into hibernation because Baby Ma'ayan turns 1 at the end of the month. I really MUST knit her a gift, don't you think? 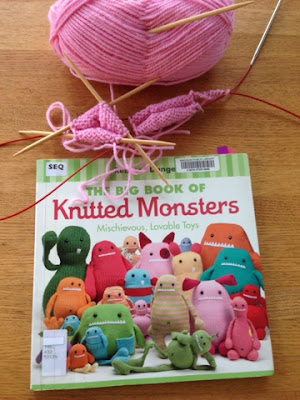 So I've cast on -- even though I said I wouldn't -- for something new: a monster from The Big Book of Monsters by Rebecca Danger. I've checked this book out of the library a number of times; finally I have an excuse to try making one of the projects.

Danger recommends that you knit her monsters using magic loop, a technique that, frankly, terrifies me. But I have always wanted to learn how to do it -- I love the idea of knitting two socks at once! -- so I'm taking the plunge. I have managed to start the first leg on dpns, as instructed, and slip it onto the circular needle.

I've also scratched all the books I was looking at last week. Instead, I'm reading Timothy' Egan's Short Nights of the Shadow Catcher, the story of Edward Curtis, the photographer who made it his mission to get photos of the disappearing Native American peoples. Egan, famous for his book about the Great Depression, is truly a great writer. The first couple chapters were fascinating. 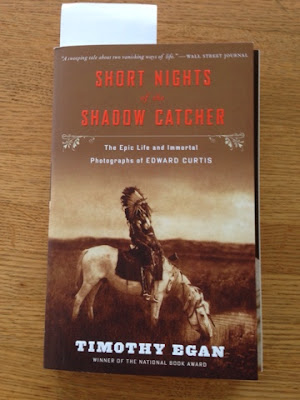 So, then we get to what I didn't read:
I am not one of those people who has to finish every book she starts – in fact, I’ve become the opposite. Here are some of the books that I put down:
Hunger Makes Me A Modern Girl by Carrie Brownstein. I love Brownstein in her Portlandia role, but her autobiography just didn’t grab me. I’m sure someone who is younger and loved her band (Sleater-Kinney) would find it fascinating. 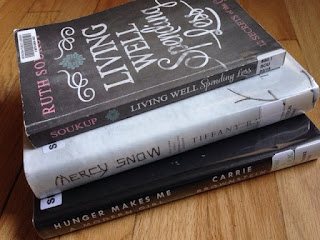 A Spool of Blue Thread by Anne Tyler. I loved her first six or seven books, but haven’t liked any of the later ones. The writing in Chapter 1 of this book is downright amateur. She uses conversation quite awkwardly to convey background information. I didn’t get very far before I slammed this one shut.
Mercy Snow by Tiffany Baker. First, let me say that this book involves knitting! It’s actually a pretty decent read for a piece of popular fiction (yes, I’m a bit of a snob). I just wasn’t in the mood for it.
Join me in checking out what everyone else is knitting and reading this week with Ginny's Yarn Along.
Posted by Caffeine Girl at 4:57 AM